Bacon may soon become scarce in California. This state with the most residents in the U.S. passed a law (by a lot of votes) in 2018, the Farm Animal Confinement Proposition (Prop 12), that goes into effect on January 1, 2022. It specifies that more space must be provided for breeding pigs (along with egg-laying chickens and veal calves) on the farms where they are raised, whether in state or out of state, if related products are to be sold in California. Because most of the pork sold in California is produced in Iowa, most of the state’s supply may become unavailable or more expensive beginning in January, assuming the law is enforced and not somehow circumvented by pig producers. Apparently the producers of veal and eggs report they can pretty much meet the requirements, but the pig producers not so much. Read more at ABC News:

So now might be a great time for California residents to consider some bacon fakes to substitute into your breakfasts, BLTs, and other menu items. If you live somewhere else, try some bacon fakes anyway. Go ahead - take a chance on bacon fakes now, for the plant-substituted benefits of less fat in your diet and just in case bacon becomes a little more pricey or scarce in your area, wherever you live.

Of course, nothing tastes like real bacon, but I haven’t tasted real bacon for decades, and I am not feeling deprived. My recommendation is to tell your taste buds, “Taste buds, nothing will taste exactly like bacon, so get over it and get on with enjoying new things!“ Also, there are some very delicious bacon fake options that I really think your taste buds will enjoy if given a sample. Here are some made-from-plants ideas for you to consider:

LIghtlife Tempeh Smoky Bacon This is a a very tasty bacon alternative. 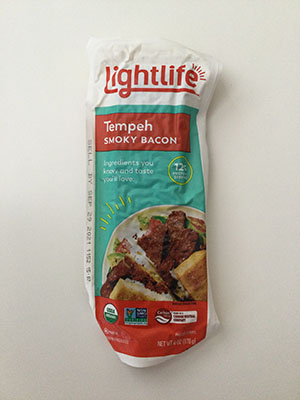 The tempeh slices are a nice version of thin and when fried, especially in a cast iron frying pan, turn out wonderfully crispy. They are packed with protein - 12 grams in four strips - and add a rich flavor to your sandwich or breakfast plate. No trans fats or saturated fat make an extra case for a bacon alternate such as this. Lightlife has been around since 1979, so they have plenty of experience making their products (and they have lots of other meat alternatives, including sausages and breakfast patties). Plus these strips are organic! I really like this “bacon.”

Franklin Farms Organic Original Tempeh This product is a very simple recipe of soybeans and water, and it is organic. 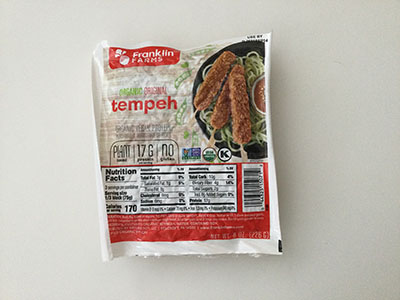 You can easily slice this tempeh quite thin, marinate it in soy sauce, fry it up (maybe in your cast iron frying pan for a consistent crispy exterior) and add it to your sandwich for a very satisfying bacon-like substitute. As a bacon fake, it is savory and filling, and I really like it.

This Franklin Farms Organic Original Tempeh is a favorite of mine because it demonstrates you do not need to find a plant-based product labeled “bacon” to get a bacon substitute onto your plate. Tempeh does the trick, making a bacon fake more accessible when the “real” fake bacon is sold out, which does happen at my local stores.

Now if you want to know exactly where and how your fake bacon is made, here is a super fun idea to make your own bacon - from carrots! Watch and be inspired to try it yourself!

Vegan Nutrition Tips, Ideas & News for making plant based menu choices. Add more plants to your diet one step at a time with our ideas & suggestions.

Get the latest Plant Powered People news in your mailbox by subscribing below.